This workshop is a reconstruction of the Rosenhof forge in Muta, Carinthia. Heralding the later development of industry, it is typical of a specific type of forge that became established across Slovenia during the 19th century. Around 150 such water-powered smith’s workshops were in operation on Slovene territory in the past. The process by which a semimanufacture can be fashioned into a precise instrument by means of man’s ingenuity and skill applied in conjunction with the harnessed motive power of water is indeed something to behold. At Bistra, three waterwheels are used to power such workshop devices as a sledge hammer, a small hammer and a stone grinding wheel, as well as mechanical bellows to heat up the furnace. In addition to this and the various products of the forge, there is a large collection of tools including tongs, hammers, anvils, a drilling machine and a screw press. 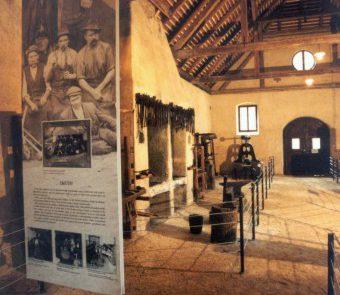