In centuries gone by, the wheelwright, blacksmith and farrier were crucial to the proper function of society, and their trades were integral to the daily life and work of just about everyone. It is almost impossible to have imagined existence without the products manufactured in the numerous workshops of these artisans. Blacksmiths manufactured and repaired every imaginable type of tool, and bound the wheels of carriages and carts with iron. For the most part farriers made and fitted horseshoes. In addition to professional knowledge, the farrier’s tasks were exacting and required years of experience to accomplish adroitly. These craftsmen originally learned their trades through long apprenticeships, and after 1850 formal professional training was also provided by the School of Farriery that operated in Ljubljana until 1962. Undoubtedly the most characteristic and well-known product of the wheelwright was the wooden wheel. Wheelwrights were, however, also engaged in the manufacture of wooden parts for vehicles of all types – carriages, carts, coaches, sledges and even skis, and in the early 20th century they also became involved in the fashioning of wooden coachwork for cars and charabancs. In centuries gone by, wheelwright and blacksmith were closely connected and complemented one another. The wheelwright produced the wooden parts of the carriage, while the blacksmith provided the iron ones, and their workshops quite often operated as a unity, or at least in close proximity to each other. It is for this reason that these trades are presented together in the Museum. In addition to reconstructed workshops together with associated tools and products, the collection features the history and explains the significance of these crafts in the territory of Slovenia. A selection of short films provides an introduction to the particular trades and products of both the wheelwright and the farrier. A review of the development of horse- and other drawn vehicles in Slovenia’s rural economy – together with a display of the component parts of such vehicles – form an interesting supplement to the wheelwright collection. 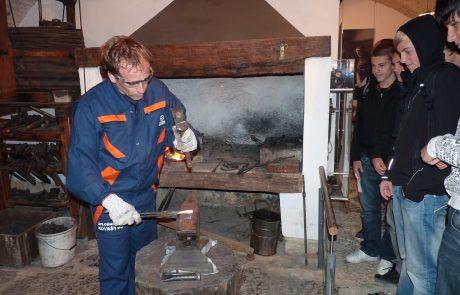