The earliest written records of saw milling at Bistra are found in the land registry of the Carthusian monastery for the year 1659. A preserved oil painting of the monastery dating from 1724 portrays the Venetian sawmill in the exact same spot as today’s veneer sawmill. The culmination of saw milling at Bistra dates back to the second half of the 19th century, when three waterdriven mills operated side by side. By 1904, however, the last of these had ceased operations. The only part of the original plant to survive is the sawmill built on the foundations of a former warehouse used by haulage watermen who traversed the Ljubljanica in the days before road transport became commonplace.
Reconstruction of this, the TMS’s first water powered mill, began in 1954, since which time it has been refurbished on three occasions. The mill is powered by way of a relatively simple yet effective undershot bladed shaft – rather than a larger and more conventional water wheel. Power is transferred from the drive shaft to both the vertical saw and log carriage by way of connecting rods and a metal hook and chain. The carriage, the speed of which can be controlled by adjusting the flow of water through the race, feeds a log of up to 420 cm in length and a maximum diameter of 65 cm into the path of the single reciprocating saw blade.
When water reserves are sufficient, it takes approximately 15 minutes for the saw to cut a single board from a 4-metre-long spruce log with a 40-cm diameter; thus approximately 2 to 3 cubic metres of timber may be sawn during a ten-hour working day. 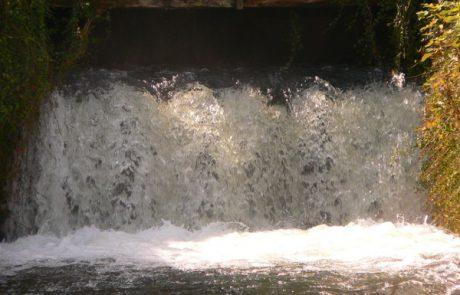